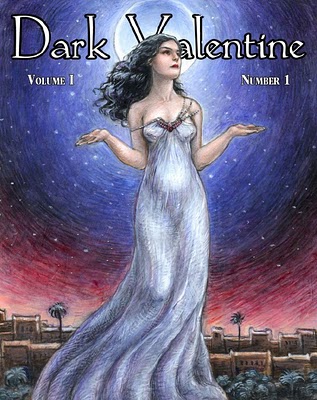 Dark Valentine. He lays out some of the contributors, artists, and shares some of the themes of the magazine which can be found in PDF here.

While your checking out magazines, try a little poetry to go along with the fiction and artwork. Gerald So is one of the editors of The Line Up a magazine of crime poetry which has featured writers like Patricia Abbott, Sandra Seamans, Michael A. Flanagan, and others. Really interesting stuff there so go get some poe-try on.

Over at Twist of Noir, Cris Benton’s story,  is well worth the time to read.

Paul D. Brazil turned me on to Fiction Daily which bills itself as finding “good stuff to read in places you wouldn’t normally look”.

MediaVirus Magazine is another source for some really cool reads. Clearly the intertubes are a problem, because I’d do nothing but sit around and read if I could.

Hell Hole is Chris Grabenstein’s fourth mystery novel and Jen Forbus reviewed it for us at her site, Jen’s Book Thoughts.

Can someone please tell me why it takes so damn long to get Huraki Murakami’s new book, 1Q94, in English. It won’t be out until September 2011.

Flash Magazine is accepting submissions for its October issue while 977, which used to be nothing but flash is now up and accepts short stories as well.

If you have a crime novel manuscript sitting on your desk and you’re not sure what to do with it, perhaps you want to submit it to The New Pulp Press for review.

My novel KARMA BACKLASH is out via the good folks at Snubnose Press.

I am a co-editor at Shotgun Honey. I'm very honored to be a part of that esteemed crew.

My stories have been published in magazines like Crime Factory, Needle Magazine, Big Pulp, Beat to a Pulp, and others. You can see some below.

I've also contributed to anthologies such as CHIVALRY IS DEAD from May/December Publications, OFF THE RECORD from Guilty Conscience, HEROES & HERETICS from Pulp Empire, and LOST CHILDREN a charity anthology.

I reside in North Carolina with my family and a multitude of animals.

Chivalry Is Dead - An All Male Zombie Anthology

Outside The Dream (available now)

Best Served Cold: an eye for an eye

I Wanna Be Sedated (available now)

Off The Record - A Charity Anthology

Writings for Your Perusal

"To Honor and Obey" - Yellow Mama

"Exit the Flesh" - Twist of Noir

"Soliliquey and Whatnot" - The Flash Fiction Offensive

"Beauty in the Eye and All That" - Powder Burn Flash

"That Was That" - Pulp Metal Magazine

"Who Doesn't Love Some Sugar" - Twist of Noir

"Paint Me A Victim Make Me A Cause" - Big Pulp

"Chin Wag At The Slaughterhouse" Interview with Richard Godwin

""Interview with Steve Weddle on THE AZREAL DECEPTION